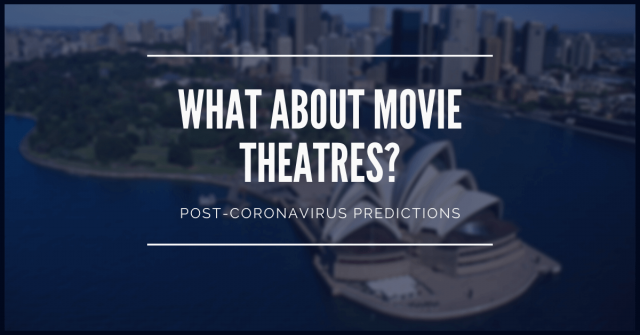 I’ve been thinking a lot about businesses impacted by Coronavirus.

Which businesses thrive, which survive and return back to “normal” in the coming months and years…

And which businesses don’t come back, or come back completely different.

As an avid moviegoer, movie theatres are one of the most interesting businesses at risk to me.

Today’s article in Variety about Cinemark — one of the three biggest movie chains in the world — caught my eye.

“Studios have pushed many of their upcoming releases back until later in 2020 or 2021, meaning that the summer blockbuster season will essentially be a wash. That’s catastrophic for the movie business, which makes more than half of its revenues during the summer.

“Cinemark has furloughed employees and shut down nearly all of its nearly 350 locations nationwide. CEO Mark Zoradi and Cinemark’s board of directors will forgo their salaries during the crisis.”

From another article in Deadline, with the CEO of Cineworld (which also owns Regal):

“We have stopped all new projects because we need to be careful and responsible from a cash point of view.”

When we come out of this pandemic, I think movie theatres will see massive changes.

Here are my best guesses on what happens:

It’ll be interesting to see what happens.