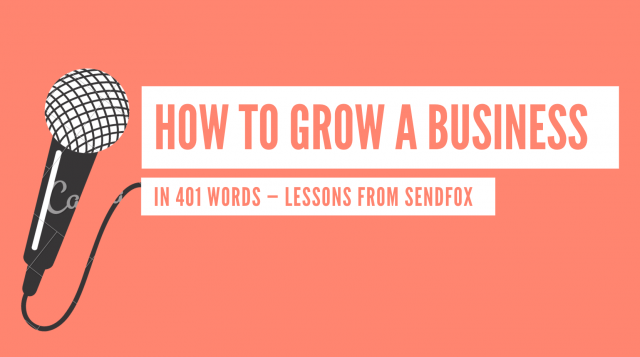 Recently, our team at SendFox had our two-year anniversary.

It had me reflecting on how we grew from $0 to $100,000+ in monthly revenue, so I shared a message with the larger Sumo Group team on Slack.

I wanted to share a slightly revised message publicly… so new entrepreneurs can see what really happens to grow a business.

In the early days, it was me and Noah hitting up all our friends to join SendFox (translation: it was mostly Noah because he has a lot of friends).

And WHILE we were hitting up everyone we knew, Henrique and Garrett were building SendFox from scratch at literally the same time. Daily, we had a new major feature — schedule emails one day, automations the next, landing pages on another.

Every sale was manual, and every day I was hustling with demo calls. Attached is a screenshot of one of our first weeks full of demos.

But we didn’t stop.

And by the end of 2018, our monthly recurring revenue was $2,290. Advice from Seann on how to write killer sales copy helped a ton.

Then 2019 came, and we still pushed forward. Every month, we kept building.

More new features, and more perseverance. In mid-2019, Chad had the idea of a lifetime deal for SendFox.

My immediate thought? “No way.” But with more convos, I was convinced.

Now in September 2020, we’ve had our best six-month streak ever.

This wouldn’t be possible if we didn’t grow our team to a group of insanely talented people, too. Garrett and Henrique are crushing it as always — now with the help of Marnie, Samantha, Dave, Srba, Luka, and Garry.

It’s still amazing to me to reflect on how far we’ve come. And for Noah, Chad, and Ayman for their continued advice.

Despite all the “no” we received in the early days, we now have 30,000+ users — ~10x increase in 2019 and ~4.2x increase pace this year. It’s super cool to see many of our customers include bigger names: A brand by Ryan Holiday & Casey Neistat, Charlie Hoehn, Shane Snow, MuchelleB, and Yoga With Adriene.

If I were to sum it all up: How we pushed past the ups-and-downs, and what we stand for at SendFox & Sumo Group…

Rome wasn’t built in a day, and neither are successful businesses. Keep your head up.